These robots are precise in their movements, an advance that may pave the way for more durable drones and smartphones. 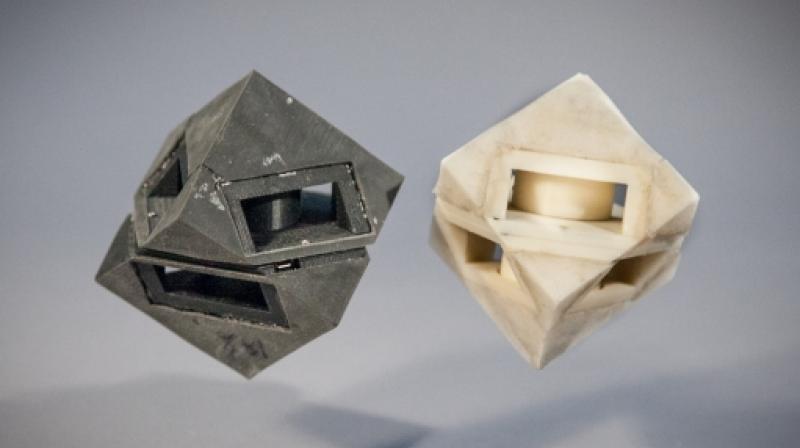 MIT scientists have created new 3D-printed cube robots which have shock-absorbing skins and are precise in their movements, an advance that may pave the way for more durable drones and smartphones.

Researchers developed the programmable viscoelastic material (PVM) technique that allows users to programme every single part of a 3D-printed object to the exact levels of stiffness and elasticity they want, depending on the task they need for it.

They 3D printed a cube robot that moves by bouncing, and outfitted it with shock-absorbing “skins” that use only 1/250 the amount of energy it transfers to the ground.

“That reduction makes all the difference for preventing a rotor from breaking off of a drone or a sensor from cracking when it hits the floor,” said Daniela Rus, Director of Massachusetts Institute of Technology’s (MIT) Computer Science and Artificial Intelligence Laboratory in the US.

“These materials allow us to 3D print robots with visco-elastic properties that can be inputted by the user at print-time as part of the fabrication process,” Rus said.

The skins also allow the robot to land nearly four times more precisely, suggesting that similar shock absorbers could be used to help extend the lifespan of delivery drones.

Dampers have many applications, from controlling the notes of a piano, to keeping car tires on the ground, to protecting structures like radio towers from storms.

The most common damper materials are ‘viscoelastics’ like rubber and plastic that have both solid and liquid qualities. Viscoelastics are cheap, compact and easy to find, but are generally only commercially available in specific sizes and at specific damping levels because of how time-consuming it is to customise them.

The solution, the team realised, was 3D printing. By being able to deposit materials with different mechanical properties into a design, 3D printing allows users to programme material to their exact needs for every single part of an object.

“It’s hard to customise soft objects using existing fabrication methods, since you need to do injection moulding or some other industrial process,” said Jeffrey Lipton, from MIT.

Using a standard 3D printer, the team used a solid, a liquid, and a flexible rubber-like material called TangoBlack+ to print both the cube and its skins. The cube robot includes a rigid body, two motors, a microcontroller, battery, and inertial measurement unit sensors. Four layers of looped metal strip serve as the springs that propel the cube.

“By combining multiple materials to achieve properties that are outside the range of the base material, this work pushes the envelope of what’s possible to print,” said Hod Lipson, a professor at Columbia University in the US.

Rus said that PVMs could have many other protective uses, including shock-absorbing running shoes and headgear. By damping the motion brought about by robots’ motors, PVMs are not only able to protect sensitive parts like cameras and sensors, but can also actually make the robots easier to control, researchers said.